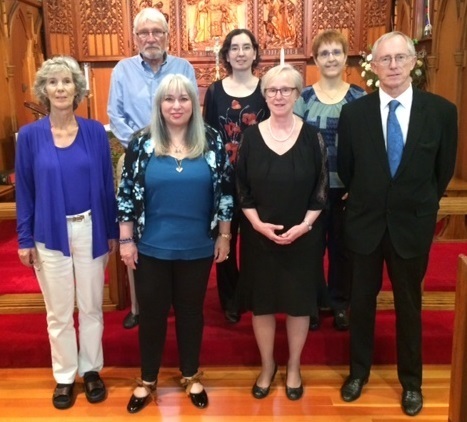 As promised, the Organ Fundraising Concert held on Saturday, September 7th was full of crowd pleasers! Who knew that one could play jazz on an organ!

Thanks to the organists who took part: David Berry, Nicholas Fairbank, Sandra Fletcher, Jennifer Mitchell, Rosemary Laing, Christine Purvis, Susanne Reul-Zastre, and bassoon player/MC Matthew Robertson. This was a terrific concert played to a packed house! The audience LOVED to watch those hands and feet flying over the manuals and pedal on that big screen. And now they not only know that playing the organ is a full-body workout, but most importantly, LOTS of FUN!

During the concert, as a special treat for the audience, a camera was positioned in the organ loft to show the organist's hands and feet flying over the manuals and pedals. The audience saw all of this activity on a big screen on the pulpit side of the church. The program showed the different orchestral colours of the organ and featured pieces written either specifically for, transcribed, or arranged for the organ as both a solo and an accompaniment instrument.

Click here to see a video of Director of Music, Susanne Reul-Zastre, playing as a teaser, Bach's Concerto in a-minor, which was posted to Facebook prior to the concert. Visit the Fundraising Concerts page for more information.

Thanks to everyone who made donations at this concert and at other times throughout the year. The donations have paid for the repairs done in August and we can start to think of having the next tier of needed repairs done later in the fall.