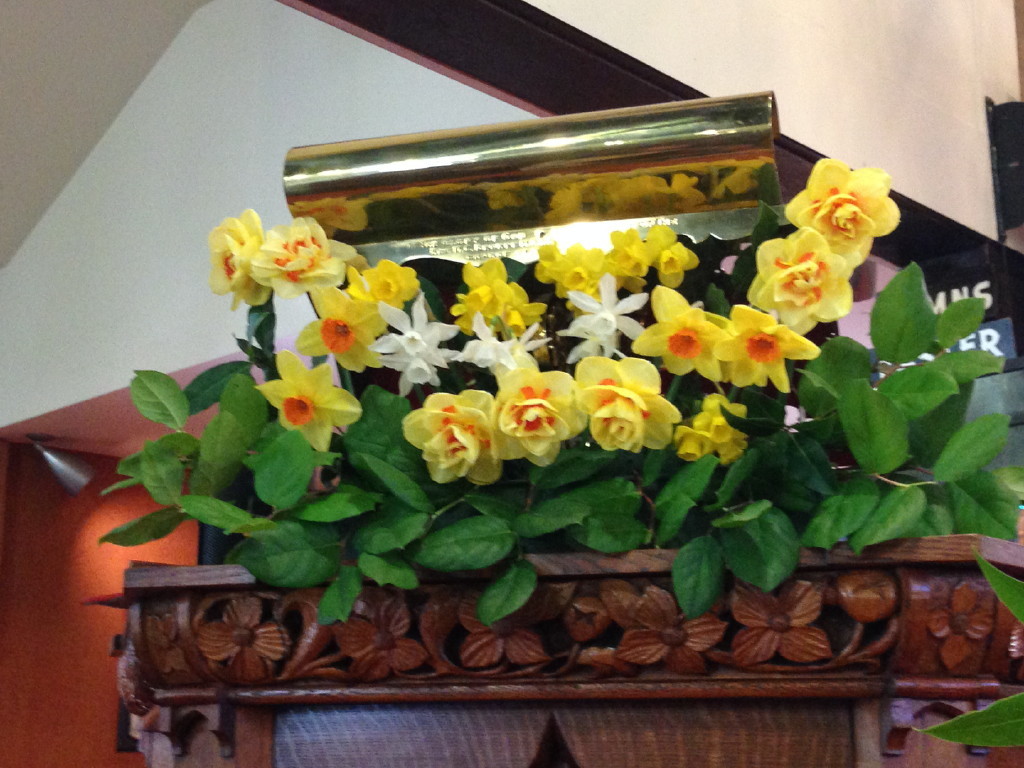 The work of the Altar Guild at St. Luke's began with the formation of the Ladies Guild in October 1890. While this group was counted on to raise funds to augment other income of the parish, this group also supplied flowers for the church and dressed the altar. Church records imply that around 1913 the name was changed to Altar Guild.

Around 1920, the question of "woman's work" in the parish was discussed and it was resolved that the Altar Guild be responsible for providing flowers, dressing the altar, and taking care of the linens and sacred vessels.

The first mention of the Altar Guild in the Church Committee's minutes was September 11, 1922. Further, the Altar Guild ladies, who had supplied and arranged flowers and taken care of the Chancel, were thanked at the Parish Annual General Meeting held January 14, 1924.

There is no record of Altar Guild meetings or executives for the 1920's and 30's, although financial statements were presented at the Parish General Meetings with the one for 1928 signed by Eva Welby (secretary/treasurer).

In 1941 there were twelve active members with an elected executive and by 1943 meetings were held monthly. At the Rector's request, many social events were staged over the next few years to raise money for work within and outside of the parish. "The social affairs were to be of a community spirit to draw the young people back to the church and also to help the young men in the services" (Annual General Meeting minutes of June 7, 1943). These events were undertaken with the hope there would be support from the parishioners and included musical evenings, dinners, teas, and dances.

In 1943, Canon Pike suggested to the Altar Guild that as there was no suitable parish chalice, the congregation be invited to turn in their old silver to be melted down and fashioned into a chalice. It was estimated this would require 20 to 30 ounces of silver and cost $50.00 to make. Although there was some response, by the end of 1944 there was insufficient silver and there was no record this project was completed.

In 1945, a one tap hand basin was installed in the vestry, making it easier to access water which still had to be heated for washing the communion vessels.

Minutes of meetings held during the 1950's and 60's are missing, but records show that by 1969, Altar Guild meetings were held quarterly and there was also an Annual meeting. Some committees had been formed for specific duties - i.e. care of linens, weddings, and funerals. The Altar Guild was no longer organizing fund raisers for the parish, but members willingly participated in these activities and for many years organized the Plant Stall for the Spring Fair.

For many years, members of the Wedding Committee arranged flowers for these happy occasions. This was discontinued in 1981 when the Rector decided the Altar Guild would no longer offer this service. From the early days of the Parish, the Altar Guild has decorated the church beautifully for the Festivals as well as providing flower arrangements for special occasions in both the church and the hall.

In 1976, a Flower Festival was organized by the Altar Guild to raise funds for the Cemetery Committee. The flower arrangements, a worship service, and musical concert made this a successful affair. St. Luke's Altar Guild has also participated in three Flower Festivals at Christ Church Cathedral - the first in the summer of 1976.

Members used to assist the young ladies to don their veils for Confirmation until about 1983, when the practice of wearing a veil was no longer prevalent. On several occasions the Altar Guild also prepared and served refreshments following this service.

In 1984, an Outreach Fund was begun, with the members contributing voluntarily at each meeting. These monies are sent for Altar Guild work to the Diocese of Caledonia or donated to other causes designated by the members. Outreach has also occurred with the donation of items no longer used at St. Luke's. These items have been sent directly to another parish or given to the Diocesan Embroidery Guild for refurbishment and subsequent shipment to another church. Various linens and frontals have been handles this way.

In 1985, the first Diocesan Altar Guild meeting and workshop was held at the Cathedral and attended by several members from St. Luke's. We have attended others since, the last being in 1998. This meeting was a time of worship, fellowship, learning, and sharing. As we had been invited to bring things which would be of interest to other parishes, our Manual was on display and was the envy of some other Altar Guilds. This guide book was developed by one of our members in 1989, and is an extremely valuable tool when carrying out our duties.

It is interesting to note that before 1992, no one had been inducted into the Altar Guild. During that year there were two Services of Induction, thus making even those who had been serving in the Altar Guild for years truly members.

Through the years many women have shown commitment and loyalty, serving with the priest to help the worship life of the parish run smoothly. The care of the altars, sanctuary, and their furnishings are a ministry of love undertaken in the name of Christ.